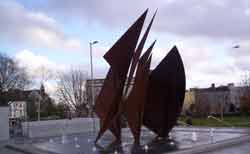 At Gilmartin Solicitors we offer you the benefit of our extensive experience in criminal law. Brian Gilmartin has practised criminal law since qualifying as a solicitor. Below is just a sample of the various areas we cover in the District & Circuit Courts on a daily basis. While we are based in Galway city, we travel to Courts throughout the country. We are included on the Free Legal Aid Panel and we also deal with fee-paying clients.

These are very common offences under the Irish criminal law system and covers such areas as being intoxicated in a public place, threatening and abusive behaviour, obstructing a Garda in the course of his/her duty and refusing to leave an area when directed by a member of the Gardai.

We deal with offences from the simple possession of a controlled drug to possession for the purpose of sale and supply and also the cultivation of drugs. In cases involving larger quantities of drugs, the case may be heard before the Circuit Court. We have broad experience in dealing with drugs offences in both the District and Circuit Courts.

This is a very wide area of law and covers a large range of offences. We regularly deal with charges of driving without due care and attention, careless driving and dangerous driving. We also deal with offences such as driving with no insurance, driving without a driver's licence, speeding and other less serious charges such as failing to display a tax disc and parking offences.

The Non-Fatal Offences Against the Person Act 1997 deals with assault offences. A section 2 assault is the most minor assault and is generally dealt with in the District Court. A section 3 assault is an assault which causes harm and may be dealt with either in the District Court or the Circuit Court. We also deal with various other offences in this area such as harassment, false imprisonment, threats to kill or cause serious harm and so forth.

Am I entitled to Legal Aid?

Brian Gilmartin is included in the Free Legal Aid Panel which means that the presiding Judge can assign Free Legal Aid to a solicitor from this office in order to represent a person who qualifies under the scheme.

What period of disqualification will be imposed for a drink driving offence?

If a person is convicted of drink driving, the Judge must impose a period of disqualification from driving. The length of the disqualification depends on the person's alcohol reading at the time of the offence.

When can you apply for restoration of your driving licence after being disqualified from driving?

The rules in respect of early restoration of your driving licence changed under the Road Traffic Act 2011. A person must be disqualified for a minimum of three years in order to apply for early restoration.